Acropolis Museum and National Archaeological Museum will appeal to museum buffs. Step out of the city life by going to Glyfada Beach and Vouliagmeni Beach. Take a break from Athens with a short trip to Temple of Poseidon in Sounio, about 1h 15 min away. Next up on the itinerary: explore the ancient world of Acropolis of Athens, admire all the interesting features of Panathenaic Stadium, take in the awesome beauty at Mount Lycabettus, and pause for some photo ops at Temple of Olympian Zeus.

For where to stay, traveler tips, photos, and more tourist information, refer to the Athens online sightseeing planner .

If you are flying in from United States, the closest major airport is Eleftherios Venizelos International Airport. In June, daily temperatures in Athens can reach 86°F, while at night they dip to 70°F. Wrap up your sightseeing on the 7th (Thu) to allow time to travel to Fira.
more less

Fira, the busy capital of Santorini, sits on the very edge of a volcanic caldera.

Step off the beaten path and head to Hiking Trail Fira - Oia and Cathedral of Saint John the Baptist. Your itinerary includes some good beach time at Red Beach and KAMARA BEACH. There's still lots to do: explore the ancient world of Akrotiri, learn about winemaking at Venetsanos Winery, discover the deep blue sea with a scuba or snorkeling tour, and tour the water at your own pace with Alex Private Boat Rental.

Traveling by combination of flight and bus from Athens to Fira takes 4 hours. Alternatively, you can do a combination of taxi and ferry. June in Fira sees daily highs of 82°F and lows of 70°F at night. Wrap up your sightseeing on the 10th (Sun) early enough to travel to Chania Town.
more less

Things to do in Fira 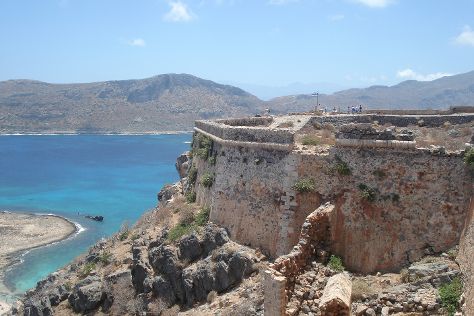 The place where Cretan and Venetian cultures merged in the 13th century, Chania Town attracts throngs of tourists with its well-preserved medieval harbor.

You'll enjoy a bit of beach vacationing at Balos Lagoon and Loutraki Beach. Visiting Kalathas Beach and Kalivaki Beach will get you outdoors. Explore Chania Town's surroundings by going to Winery Dourakis (in Alikampos), Kastro Gramvoussas (in Gramvousa) and Ancient Olive Tree (in Vouves). The adventure continues: stroll the grounds of German War Cemetery and take in the architecture and atmosphere at Holy Trinity Monastery (Agia Triada).

Things to do in Chania Town